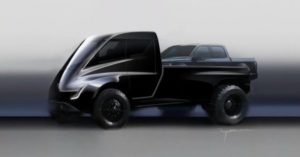 Tesla intends to make serious business of the segment of best sold vehicles in the US. The thing is, this first sketch promises something that looks quite different from a traditional pick-up truck. Yet, this is what Tesla showed.

The pick-up truck looks more like a vehicle meant to drive on the surface of Mars, or like a mini truck. It is the latter that Tesla’s Elon Musk wants to show us. The specs of the new Tesla should convince anyone quickly to buy it. Think of continuous all wheel drive from two e-motors, and suspension that always adapts immediately to the load, like Citroëns from the past.

The new Tesla would have six seatsand it should have a range of 400 miles (640 km). It would share driveline technology with the Tesla Models S and X. A time for a release date is not set, as Tesla is still working to overcome production difficulties with the Model 3.

Share me:
← 4th ‘nextgen’ Scania T produced by Vlastuin
Another glimpse of the new Ford →